Across the street from Sundown, nothing feels fine.

On Saturday afternoon, I asked my dad and Wendy the Expecting to indulge me on some afternoon nostalgia and we drove through Edgerton and Indianford, the area where I rode bikes, got bored, swam and grew up.

Indianford is the setting of our song, Fish Fry. A couple of miles from my family’s former place on the Rock River, it’s a patch of a town, really, two bars — Sundown and The Showboat —  and a bridge. I loved it. It’s where I first heard a bar band do its thing — Country Ivy played at the Sundowner’s Snowmobile Club corn boil. They played inside the air-conditioned bar and did songs like “Running Bear” by Sonny James and “Looking Out My Back Door.” I tried to stay inside and watch as long as I could. It was crowded and loud. I think I was the only one watching the band.

Later, I worked at a great restaurant across the bridge, Tibbie’s (“Where Chicken is King”). Talk about owning the world. We’d broil steaks, deep-fry chicken and go bonkers keeping up for some frantic stretches on weekend nights, then swipe a few six packs and hit the river for a late-night boat ride to wherever. Tibbie’s isn’t around anymore.

It was Friday night and I just wanted to be back home.

The bridge covered a dam that was getting blasted by the high river water Saturday afternoon, and a bunch of people were fishing along the shore. 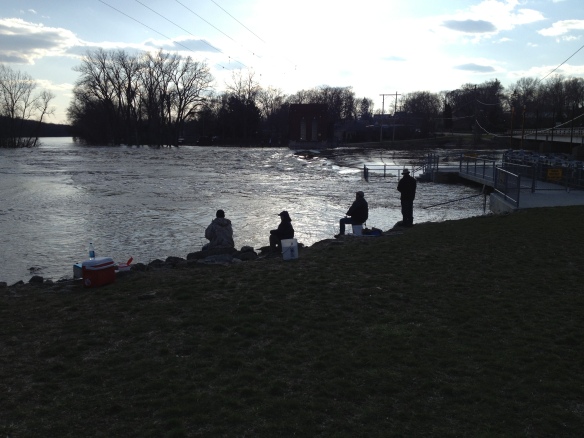 Every day I think of you and that bridge outside.

Back on the interstate it struck me that we’d left a nursing home, which was housing the woman who’d get mad if I rode my bike across Highway 51 to Indianford. Wendy the Expecting is bringing a little boy into the mix next month to start everything all over again. I had been taking in the river air and feeling like it was just last night that me and Dan and Hal turned off the last of the fryers and led waitresses, bus boys and dishwashers into another night that ended with the sunrise.

Time does a lot of unsettling stuff and it doesn’t always allow for afternoons such as this one.  I’m grateful it did, and for who I was with making that trip.

And I’m really glad that kid watching Country Ivy got to be in a bar band.